Image Tonality and the Histogram- Part One: The Dark Side

If you don’t fully understand the purpose and useful functionality of a histogram, you’re not alone. I would venture that most folks who edit digital images really don’t understand what the little mountain range chart is telling them or how to make use of that information. This Image Tonality and the Histogram series will present a fairly comprehensive look at image structure using the histogram as a barometer. Within this session I will refer to the histogram simply as a tone map, because… that’s what it is.

The histogram is a tone map that displays the dispersion of tones within an image, and it is critical that we understand what the map information means. This tonality discussion lies at the very heart of image preparation; and is fundamental to all image presentation. In fact, the establishment of an image’s tonality is the foundation upon which color is supported. Before you hang any wallpaper you must have a structurally sound wall on which to hang it. Any image structure is only as good as its foundation. This is image shaping 101. Do I think this topic is important? Actually, it’s critical!

DISCLAIMER: There are dozens of tools in Photoshop and Lightroom that allow you to tinker with tonality. Most of these are overlapping function, razor-sharp mathematic scalpels that appear in menus with little (or no) photographer-friendly instructions concerning their safe usage. While all are very powerful tools, this series will address only a handful of easy-to-understand tools that I personally use day in and day out. My blog, my choice! Hrrumph!

There are several ways to view an image’s histogram in Photoshop and Lightroom. The three ways that I will use are (top)the data/statistic reference version found in the Window menu, (right)the Curves, and (left)the Levels dialog- both of which located in the Windows/Adjustments menu. The Layers and Curves dialogs are the operational tools that show the histogram graph and allow you to change the settings to alter the image’s tonality. The data version is displayed in stylish reverse (dark gray) while the operational versions are displayed in utility white. While we will adjust tonality using several different tools, we’ll use the visual reference on the Levels-based histogram.

The histogram has a “dark” side not just because of its reference to the darker tones in the image, but because it is visually confusing; perhaps not so much to engineers and scientists, but to many photographers. Since photographers perceive issues visually, this graph presents a problem. Just look at the difference between the Levels and the Curves display of this graph. Yes, these both reflect the values of the same image.

Perhaps the best thing to do first is to dispel some common misconceptions and fears…    • The height of the mountain peak has nothing to do with the darkest part of the image     • The width of the mass simply indicates a smooth transition of tones • This graph simply shows which tones are dominant and which are scarce • There is no right or wrong histogram • There is no ideal histogram shape • Every image has a different histogram      • You cannot tell what an image looks like or whether it needs adjustment simply by looking at the tone map • The histogram is not the Holy Grail • It is not a report of good or bad.  It is simply a measurement device • The highest point on the graph simply reveals the tone with the most pixels • The lowest point on the graph shows an absence of pixels of that particular tone • Higher is not darker and lower is not lighter • Complexity within an image has little to do with the histogram- as you can see with the three images and histograms below. Histograms are about math and ratios. How clinical and scientific!

Alright, I’ve beat up on the sterility of the histogram long enough. Let’s see how to use it.

First and foremost, the span of this tone map represents the full scope of possible tones in an image, with solid (composite) black located on the extreme left and (no tone) white on the extreme right. The default positions of the shadow and highlight triangular sliders in the Levels dialog are on the outer edges. The mountain range represents the actual tones in the current image. In the histograms pictured below, you’ll notice some pixels in the images are already totally black (we’ll call this left extreme the shadow point) and the high-key image of the cat contains some totally white pixels positioned over the highlight point slider. These two sliders are the only absolute controls. The graph relates to the image’s tone range as it relates to solid black and pure white.

Let me restate that point. The histogram is a shell with two hard reference points: total black and pure white. The Levels dialog displays this tone map with the black slider initially located at the far left of the graph and the white slider initially located at the far right. The “range” of an image’s tones appear on the tone map in relation to black and white. If the tone range doesn’t extend all the way to the black slider, then the darkest part of the image does not contain pure black tones. If the map doesn’t reach all the way to the right wall, then the image doesn’t contain pure white tones.

It’s erroneous to assume that every image should contain pure black and/or pure white. Remember two important facts: 1) detail is a product (result) of contrast, and 2) pure black and pure white therefore represent a total absence of detail! Unless you are staring into a beam of light, nothing is pure white, and unless you’re inside a cave at night, nothing is pure black. Tones have to breath. Don’t slam them against the wall and expect detail. Most times (though not always) you’ll want detail in your darkest and lightest areas. Remember, tone separation equals contrast and contrast equals detail. 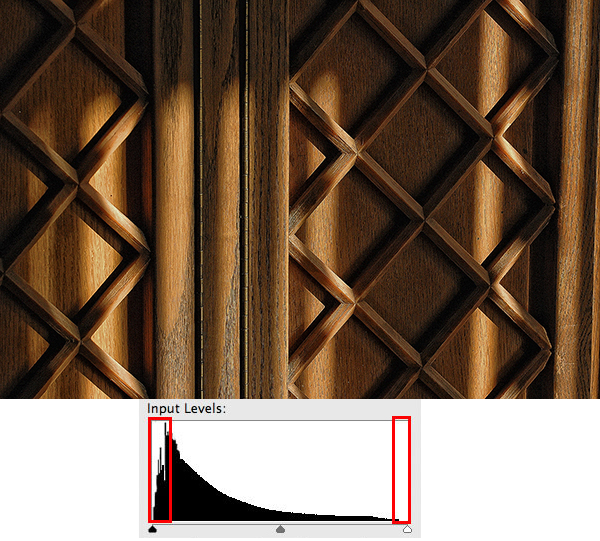 Be very careful about setting the black point inside the range map and further toward the center of the graph, because you are assigning a totally black value to what was originally dark gray, in effect compressing the tonal range and losing forever the shadow detail. This move will build serious mud hole in the image sacrificing shadow detail. Note the image above. There is shadow detail all the way down the scale. Moving the shadow point further to the right would have destroyed this important detail.

In the same way, the white point slider represents a “no tone” state. This image had to retain serious tones in the highlight region to maintain the wood grain. If the highlight point slider slider were moved to the left, the quarter-tone region would have lost significant detail forever. The move would have destroyed the highlight detail. Torch! While internal contrast creates detail, don’t be so bent on overall contrast that you actually destroy detail. 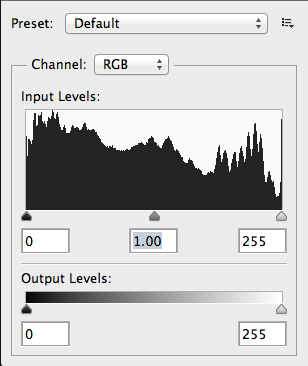 The histogram to the left belongs to the image above. Starting at the top left, this black slider is labeled zero because zero represents solid black color in 8-bit jargon. While the appearance of this graph would seem to indicate that the image would be way-dark, in reality it is not. The histogram can be visually misleading.

If you want to see the actual black pixels in this image, drag it onto your Photoshop icon in the dock. Then open the Levels dialog and hold down the Option/Alt key while clicking on the left slider. This will reveal how much of the overall image contains pure black tones.

This black slider is a pretty dangerous control in that it allows you to set the value of the darkest pixels in the image. I say dangerous because you can quite quickly eliminate shadow detail by moving this control into the foothills of the mountain range. Once the nearly-black tones are assigned the value of zero, those tones are toast. If your image already exhibits solid black pixels, don’t move the slider! There are some cases in which you’ll want to bury digital noise by infringing into this territory, but rarely. Once that line has been crossed there is no going back.

During this series I will encourage you to reorient your thinking about the histogram. I’d like you to see this tone map in five regions: shadow, three-quarter, middle, one-quarter, and highlight. You’ll see how to manipulate and adjust these areas in each image.

In addition to the five tone regions on our tone map, I want you to also see three distinct points: shadow point, mid-tone point, and highlight point. I refrain from referring to the darkest point as “black” and the lightest point as “white” simply because that kind of generalization can again be misleading. We’ll leave the absolutes of black and white to the mathematical measurements of the “mystogram.”

This series is a small excerpt from my soon to be released book titled The Digital Image: From Capture to Presentation and Everywhere In-between. If you find this series helpful, imagine what the book will do for you.

That’s the way eye sees it. Feel free to leave a comment and keep the conversation going. If you saw this post listed on a LI group page, add a comment to the listing in that group! Thanks for joining me. If you like this blog, let me know and tell your friends.

This is the first appearance of the spooky series called Image Tonality and the Histogram. This first installment is open to the public but the balance of the series will be available only to followers of this blog. Sign in now (top right of this page).

See you next time, Herb

Click the Follow button at the top of the page so you don’t miss any future posts.

PS. if you have an iPad and are interested in learning about more about the fundamentals of digital photography, I suggest that you take a look at my Accurate Color iBook in the iTunes Store

3 Responses to Image Tonality and the Histogram- Part One: The Dark Side